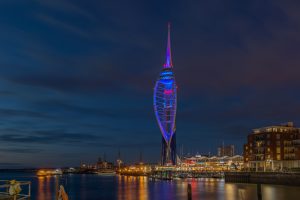 Portsmouth Water and Southern Water have joined together with the Spinnaker Tower to promote World Water Day in support of WaterAid. By turning itself blue, the Emirates Spinnaker Tower will help raise awareness of the fact that on this planet we still have the unacceptable situation where one in ten people lack access to clean, safe water. This lack of access means that around 315,000 children die each year from diarrhoeal diseases caused by dirty water and poor sanitation. That’s almost 900 children each day, or one child every two minutes.

World Water Day, on 22 March every year, is about taking action to tackle the water crisis. The day was established in 1993 by the United Nations General Assembly and is today coordinated by UN-Water in collaboration with governments and partners. Portsmouth Water and Southern Water have supported the charity WaterAid since 1981 and will be joining the charity on its #blue4water campaign on World Water Day to raise awareness of the 1 in 10 people still living without clean water. Turning the Emirates Spinnaker Tower blue is one of many activities happening all over the world to shine a light on the global water crisis.

“I am delighted that such an iconic feature in our area has agreed to help raise awareness of World Water Day by turning itself blue. It’s unacceptable that, in this day and age, a child dies every two minutes from diarrhoeal diseases caused by dirty water and poor sanitation. World Water Day helps spread the message that we all have a part to play in helping to end the global water and sanitation crisis, while also raising valuable funds for WaterAid’s vital work in some of the world’s poorest countries. Just £15 can help provide one person with access to safe water.

“Southern Water is a proud supporter of World Water Day, and WaterAid’s valuable work raising funds for some of the world’s poorest communities. This is a hugely important issue as the lack of access to safe clean water and sanitation facilities affects millions of people across the world on a daily basis.”

“Clean water should not be a privilege – it is a basic human right. That’s why we’re calling on governments across the world to deliver on their promises to meet the UN sustainable development goal of reaching everyone, everywhere with clean water and sanitation by 2030.”

On World Water Day, WaterAid will be releasing a global report focusing on water security and how this could be affected in a changing climate. Entitled ‘Wild Water’, the report will rank the world’s worst countries for rural access to water and will show how extreme weather events, like cyclones, flooding and drought, will affect communities already struggling to access clean water.