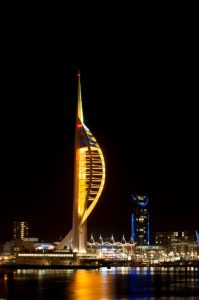 Portsmouth’s Spinnaker Tower, will be lit up bright yellow on Saturday 20 May as a badge of support for Mayday, the Royal National Lifeboat Institution’s annual national fundraiser, which is calling on people to ‘Do your bit, fund our kit’.

The celebrated landmark, will throw a yellow reflection on seafront for the special occasion, creating a striking backdrop on waters synonymous with a rich naval history and, of course, the hundreds of rescues carried out by the local RNLI lifeboat station over the years.

Through Mayday, the lifesaving charity is raising funds for the crucial kit that brave volunteer crew members rely on, like lifejackets, helmets and the RNLI’s iconic yellow wellies.

Tony Sammut, General Manager at Spinnaker Tower, said: ‘We are delighted to support this year’s Mayday campaign by turning the Spinnaker Tower yellow on the evening of Saturday 20 May. Helping to raise awareness and funds for the RNLI’s crucial kit is a worthy cause, and one that is particularly appropriate for us given our location in Portsmouth, one of the world’s most famous ports.’

Mayday distress calls can come in any time, day or night, 365 days a year, and the RNLI has 4,800 volunteer crew members from 238 lifeboat stations across the UK and Ireland on standby to drop everything in an instant to save lives.

Roseanne Blaze, RNLI Community Fundraising Manager, said: ‘Our crews rely on lifesaving kit, like their yellow wellies, lifejackets and helmets, when they go out in all weathers to save lives. From sponsored bike rides and welly walks, to running a bake sale, there are all sorts of ways to raise money for the RNLI this Mayday. Visit RNLI.org/Mayday to download a fundraising pack and see how you can do your bit to fund our kit.’

The RNLI’s Mayday campaign runs throughout the month of May and aims to raise £750,000 to fund lifesaving kit for the charity’s brave volunteer crews. A crew member’s yellow wellies cost £54 a pair, a lifejacket costs £458 and a safety helmet costs £263.

Mayday fundraising events are taking place right across the UK and Ireland, many with a yellow welly theme.

To find a Mayday event near you, or to download a fundraising pack, visit RNLI.org/Mayday