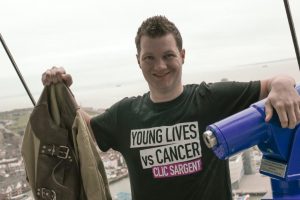 With just one week to go until our BIG Strait Jacket Escape stunt, we thought we’d take an opportunity to get to know magician Dan Churchley a little better! Dan will be attempting a strait jacket escape whilst hanging upside down 100 metres up under the Emirates Spinnaker Tower’s famous glass floor on Wednesday 12 April at 12.30pm.

Dan, when did you first get into magic and why?

I first got into magic at a young age after getting a children’s magic set. I re-found my love for it as a young adult after working as an entertainer in holiday parks.

What was the inspiration for this strait jacket escape challenge?

As a magician I’ve always look up at the greats and researched their incredible feats. The godfather of escapology is of course Houdini although I never really looked at the idea of doing such stunts until I sat down and had a think as I wanted to come up with an idea that was different and would raise money for a good cause. I’m not a keen runner and this was the most stupid and ridiculous thing I could come up with!

Have you done anything like this in the past?

This stunt is very much a one off, I have a strait jacket escape in my show but its always been done standing upwards.

So, are you nervous or excited about it?

I’m very excited about the stunt but as it draws nearer the nerves are kicking in too. It is a seriously high place to be dangled from for all to see when I’m under pressure. I’m quite sure I’ll have to find my zone when I’m up there. I’m also putting my life into other peoples hands in the way of the ropes so that is quite scary.

You’re completing the stunt to raise money for CLIC Sargent. Can you explain why the charity is so important to you?

The charity I’ll be raising money for is CLIC Sargent who help young people with cancer. CLIC sargent is not only the charity of choice but the inspiration for the stunt itself. I wanted to do something incredible for a more incredible cause. This charity is very close to my heart after losing my best friend at the age of 21 to a short fight with cancer. His name was Dan Bryant and I’ll be doing the escape in his memory. It will be nice to give something back and help a new family after the great support CLIC Sargent provided for my friend’s family.

Support Dan with his fundraising by visiting his JustGiving page.