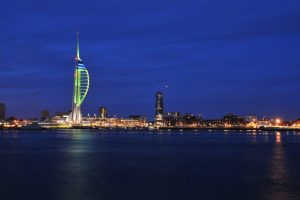 The Emirates Spinnaker Tower in Portsmouth will turn green on 16th May to raise awareness of Huntington’s disease, a little known genetic brain disorder.

The Emirates Spinnaker Tower is taking part in an international campaign called #LightItUp4HD, where buildings an landmarks across the globe will illuminate to shine a light on this rare condition, which impacts around 8,000 people and their families in the UK.

Huntington’s disease, often shortened to HD, is a degenerative condition described as having motor neurone disease, schizophrenia, Parkinson’s and Alzheimer’s disease all at the same time. It causes changes in the brain affecting movement, feelings, thinking, eating and speech.

Huntington’s affects generations of families. Anyone who has a parent with Huntington’s has a 50:50 chance of inheriting the faulty gene that causes the disease; it doesn’t skip a generation, so if a child tests positive they will develop Huntington’s. It’s like tossing a coin.

As Huntington’s is so rare and little known, people with the disease and their families can often feel isolated and can struggle to access the support and services they need. There is also historic stigma associated with the disease. Huntington’s Disease Awareness Week aims to help bring the disease out of the shadows.

Emirates Spinnaker Tower joins iconic landmarks across the UK such as the Blackpool tower and the First Direct Arena in Leeds, while internationally even Niagara Falls will be taking part!

The Huntington’s Disease Association is the only charity providing a dedicated support and advice service to over 14,000 people affected by Huntington’s disease across England and Wales.

Cath Stanley, Chief Executive of the Huntington’s Disease Association, said: “By bringing the disease out of the shadows and into the public conscious we have two aims: to reach out to people who for years have struggled in the shadow of Huntington’s by themselves, and secondly to raise awareness amongst the public of this incredibly cruel disease which can have a devastating impacting on people with Huntington’s and their families.

“Through taking part in #LightItUp4HD, Emirates Spinnaker Tower is helping to shine a light on the disease.”